Ancient Symbols of Protection From Around the World

The world has always been a place filled with powers that challenge humans in strange and awe-inspiring ways. The basic human need for protection is as old as creation itself. From the ancient Greeks, to Native American tribes; from Celts and Vikings, to Pagans, Wiccans, and Christians, ancient symbols of protection emerged with the same goal in mind – to navigate the unknown, frightening, and perceived evil.

If you feel drawn to ancient symbols of protection, it can be overwhelming to navigate the myriad options available. To explore the many kinds and types, it’s helpful to understand the places and cultures from where the symbols originate. Many of the symbols emerge from earth-bound connections, to mythology, to the darker side of our psyche.

From Animals to Eyes: Ancient, Spiritual Symbols of Protection

Native American cultures relied on their deep connection to the earth and animal spirits for protective symbols and spirits. Some of the most common include:

In addition to spirit animals, Native American tribes believe in other symbols of protection such as:

— Cacti – are the embodiment of warmth, protection, and endurance, as well as maternal love that endures regardless of harsh conditions and circumstances

— Drums – a central part of all Native American ceremonies, are the means to communicate with the Great Spirit.

— Medicine bags – usually made out of animal hide, contains items such as a pipe, minerals, tobacco, sage, and other protective items. In ancient times, medicine bags were thought to have the power to protect in times of battle and war.

Not only the protective realm of the Native American culture, ancient Celts also have a deep belief in animal spirits, from the bull, the sign of wealth, status, and fertility, to the salmon, which symbolizes wisdom and the sanctity of life.

While cultures have their unique protective symbols, there are some which reach across traditions, such as the cross, wreaths, hands, and eyes.

— Cross: Usually associated with Christianity and the crucifixion of Jesus Christ, and a sign of benediction, the cross also has significance in other cultures. The ancient Egyptian ankh is the representation of life, with the rounded top symbolizing a mirror of self-reflection. The Greek cross represents the four directions of the earth, as does the cross in Native American Cultures.

— Believed to ward off the “evil eye,” the protective symbol of the hand, or hamsa, is worn around the neck, or hung on the walls. Hamsas can be traced to the Middle East with roots in Arabic, Hebrew, and north African cultures, as well as in ancient Egypt and some Christian sects.

— Wreaths harken back to early Christianity, from the choice of the kind of branches, to the shape itself. When a wreath is displayed on a door, the symbol stands as an invitation for the spirit of Christ to enter the home. Others associate the wreath with Ancient Rome, which was hung on doors after a victorious battle. For most people, wreaths are a symbol of the circle of life, as well as the evergreen, which represents resiliency through harsh conditions. 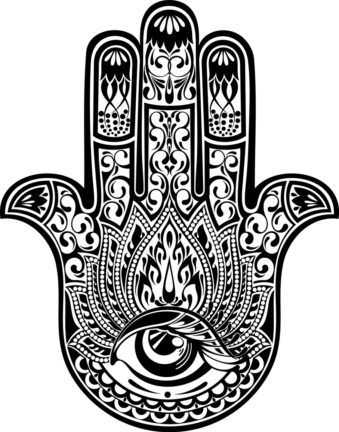 Beyond Religion: Protective Symbols in Pagan and Occult Cultures

In addition to the protective symbols religious associations, they also stand at the center of many Pagan, Wiccan, and occult beliefs The Wiccan practice of walking labyrinths signifies the full life cycle, as well as a protective path as one cannot get lost in a labyrinth; there is always a way in and a way out. For the Norse tradition, Yggdrasil, the tree of life, is a protective representation of a universal and central connection. Other pagan and pre-Christian symbols include:

Viking symbols of protection such as the Helm of Awe, whose eight-pronged trident protects against hostile forces, and Thor’s Hammer, the symbol of protection of humans, as well as blessings for marriages.

Wicca — The pentagram, a five-pointed star is thought to ward off witches and demons, while elevating spirit over matter.

Mistletoe, while normally thought of as a cute Christmas decoration, it has deep Celtic roots and is considered to be a protective symbol for everything from love, to livestock, and babies. 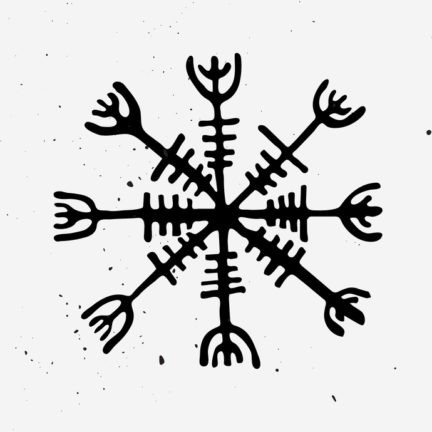 Norse Symbol: The Helm of Awe

Protective symbols can also be viewed as stemming from the desire for a more expansive relationship to all the universe has to offer — from the good, to the dark, to the in-between. The importance that protective symbols in ancient and modern cultures have in our lives could be seen as a level of humility toward powers larger than us. When life gets complicated and challenging, accessing our shared protective symbols can serve as the ultimate spiritual lighthouse, helping to guide us through life’s uncertain waters.