Exploring The Secrets of "Shambhala"

"For centuries, the people of Tibet and Mongolia have believed in the existence of Shambhala, where a line of enlightened kings, is said to be guarding the highest wisdom, for a time when all spiritual values in the world outside will be lost in war and destruction. Then, according to prophecy, a great king will come out of this sanctuary to defeat the forces of evil and establish a golden age."

Shambhala is a magical place, where all inhabitants are enlightened beings. It is believed that they are the Ones, who still to this day, protect humanity from ourselves and others who wish to cause us harm. They are considered as powerful as gods and will emerge from their hiding place, to take back the Earth when all other hope is lost. This beautiful and magical place has continued to stay hidden, even though, many attempts to find it has been made. Some speculate that it is within the Interior of the earth, inside a massive cavern beneath the great Himalayan mountains. However, many believe that Shambhala is within the etheric realms, and is inaccessible in the physical aspect and only can be visited through the higher consciousness.

The inhabitants of the kingdom live in peace and harmony, free of sickness and hunger. They all have a healthy appearance, with beautiful features, and wear graceful robes of white cloth. They speak a sacred language and all have great wealth but never have to use it. Tibetans have, in fact, taken the Sanskrit name Shambhala to mean “the source of happiness.”

Many Tibetans insist on the necessity of purifying the mind in order to go to Shambhala. Most forms of meditation used for this purpose tend to cut off, or silence, the habitual thoughts, and preconceptions that block the kind of mystic vision, the vision that may actually penetrate into other worlds as solid and as concrete as ours. By clarifying his mind in this way, ridding himself of the mental conditioning that limits his awareness, the traveler to Shambhala may be gaining the ability to see into the fourth dimension and take an actual journey through a strange, but real, landscape of fantastic deserts and mountains that lie parallel to the ones we find on maps of Central Asia.

In Tibetan Buddhist tradition, Shambhala (or Shambala) is a mystical kingdom hidden somewhere beyond the snow peaks of the Himalayas. It is mentioned in various ancient texts including the Kalachakra and the ancient texts of the Zhang Zhung culture which predated Tibetan Buddhism in western Tibet. The Bon scriptures speak of a closely related land called Olmolungring.

Shambhala in the Buddhist Kalachakra Teachings 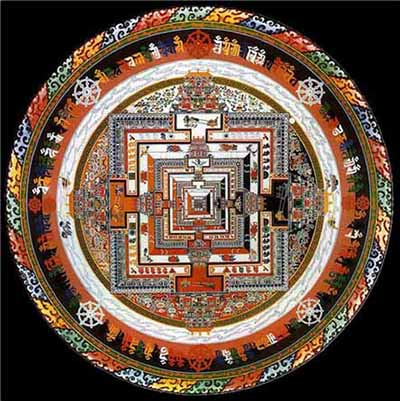 The Wheel of Time.

Buddha prophesized that all who received the Kalachakra empowerment would take rebirth in its mandala of consciousness.

The Kingdom of Shambhala takes a central place in the Kalachakra teachings. Shambhala (Tib. bde 'Byung) is a Sanskrit term meaning place of peace/tranquility/happiness. Shakyamuni Buddha is said to have taught the Kalachakra tantra on request of King Suchandra, also the teachings are said to be preserved there. Shambhala is said to be a society where all the inhabitants are enlightened, centered around a capital city called Kalapa. War and injustice are said to be unknown there, and it is said to be peopled by beautiful women and men dwelling in magnificent abodes.

Shambhala is ruled over by the Kulika or Kalki (Tibetan Ridgen) King, a benevolent monarch who upholds the integrity of the Kalachakra tantra. Religious scholars believe that this figure developed out of the myth of the Hindu conqueror Kalki, a similar personage. The Kalachakra prophesies that when the world declines into war and greed, and all is lost, the twenty fifty Kalika king will emerge from Shambhala with a huge army to vanquish the corrupt world rulers and usher in a worldwide Golden Age. Some scholars put this date at 2424 AD.

As with many concepts in Vajrayana Buddhism, the idea of Shambhala is said to have an 'outer,' 'inner,' and 'secret' meaning. The outer meaning understands Shambhala to exist as a physical place, although only individuals with the appropriate karma can reach it and experience it as such. There are various ideas about where this society is located, but it is often placed in central Asia, north of Tibet. The inner and secret meanings refer to more subtle understandings of what Shambhala represents, and are generally passed on orally.

During the nineteenth century, Theosophical Society founder H.P. Blavatsky alluded to the Shambhala myth, giving it currency for Western occult enthusiasts. Later esoteric writers further emphasized and elaborated on the concept of a hidden land inhabited by a hidden mystic brotherhood whose members labor for the good of humanity.

The myths of Shambhala were part of the inspiration for the tale of Shangri-La told in the popular book Lost Horizon, and thus some people even refer to Shambhala improperly as if it were a Shangri-La. Shambhala's location and nature remain a subject of much dispute, and several traditions have arisen as to where it is or will be, including those that emphasize it as a non-physical realm that one can approach only through the mind.

Ancient Zhang Zhung texts identify Shambhala with the Sutlej Valley in Himachal Pradesh. Mongolians identify Shambala with certain valleys of southern Siberia. Beginning in the 1960s, various occult writers have sought to explain the evil of Nazism by suggesting Adolf Hitler tapped into the malevolent forces of Shambhala when he sent Ahnenerbe researchers to Tibet to measure Tibetan skulls as part of his master race justifications. Also known that Josef Stalin organized an expedition to find Shambala.

Helena Blavatsky, who claimed to be in contact with a Great White Lodge of Himalayan Adepts, mentions Shambhala in several places without giving it especially great emphasis. (The Mahatmas, we are told, are also active around Shigatse and Luxor.) Blavatsky's Shambhala, like the headquarters of the Great White Lodge, is a physical location on our earth, albeit one which can only be penetrated by a worthy aspirant.

Later esoteric writers like Alice Bailey (the Arcane School) and the Roerichs (Agni Yoga) do emphasize Shambhala. Bailey transformed it into a kind of extradimensional or spiritual reality. The Roerichs see its existence as both spiritual and physical.

Related "hidden land" speculations surrounding the underground kingdom of Agartha led some early twentieth-century occultists to view Shambhala as a source of rather negative manipulation by an evil (or amoral) conspiracy. Nevertheless, the predominant theme is one of light and hope, as evidenced by James Redfield's and Chogyam Trungpa Rinpoche's respective books by that name.

In Neo-Nazi mysticism, Shambhala is sometimes supposed to be the place to which Adolf Hitler fled after the fall of the Third Reich. Hitler was known to have an interest in the myth of Shambhala and in "eastern mysticism" generally, from which he appropriated the swastika. Source, crystalinks.com

This we believe is where the negative association with Shambhala comes from. The word Swastika originally comes from the Sanskrit words su, meaning well, and asti, meaning to be.

The swastika has not always been used as a symbol of Nazism and was in fact borrowed from Eastern cultures. It seems to have first been used by the early inhabitants of Eurasia. It is an important symbol in Eastern religions, notably Hinduism and Buddhism, among others, and was also used in Native American faiths before World War II. By the early twentieth century, it was regarded worldwide as a symbol of good luck and auspiciousness. Swastikas appeared on the spines of books by the Anglo-Indian writer Rudyard Kipling, and the symbol was used by Robert Baden-Powell's Boy Scout movement.

The Swastika Symbol is thought to be part of the ancient Shambhala traditions. Therefore when the negative nazi movement adopted it, Shambhala itself took on a different persona as being something negative, when in fact, it is the absolute opposite.

Thank you All for your continued support of Universal Lighthouse. Please Like and subscribe for more amazing discoveries and Universal Enlightenment.

We Are Shining Light on the ALL, That is ONE...

We are dedicated to enlightening this Earth with Truth, Knowledge, and Love. You will enjoy: Research and study from Universal Lighthouse including But not limited to, Ancient Text, paranormal and supernatural exploration, Metaphysical Theology and Spiritual Awareness. You will also enjoy: Adventuring into the Unknown, Full Disclosure, UFO/UAP Phenomenon, Forbidden Archeology, New & Ancient Technology, Quantum Exploration, New Discoveries, Our Creative Nature, The Brilliance of The Universe and Much More. Universal Lighthouse offers our own Writings Plus, other information that is found throughout the Internet, We do try and find the original source for this information. However, the opinions, views, statements, and/or information we present are not necessarily the beliefs of Universal Lighthouse. Please use discernment with all the information given. We offer this information free for Research and Study Purposes. Not all information may be a current event but is to be used as a Library of information. It is our goal to raise the consciousness of humanity through knowledge, truth, and love. We are shining Light on the ALL that is One.

Join us on our FB Page https://www.facebook.com/ULight1123/

Other Pages and Groups.