The "Glastonbury Giant" and the Legend of "King Arthur".

King Arthur is among the most famous literary characters of all time. The Arthurian legend of the Knights of the Round Table, Camelot, the Quest for the Holy Grail, the love affair of Lancelot and Guinevere, and the wizard Merlin have informed and inspired literary, musical, and other major artistic visions for centuries.

But Was the Legend True? And is the "Glastonbury Giant" Actually King Arthur?

Arthur was the first born son of King Uther Pendragon and heir to the throne. However these were very troubled times and Merlin, a wise magician, advised that the baby Arthur should be raised in a secret place and that none should know his true identity.

As Merlin feared, when King Uther died there was great conflict over who should be the next king. Merlin used his magic to set a sword in a stone. Written on the sword, in letters of gold,  were these words: "Whoso pulleth out this sword of this stone is the right wise born king of all England." Of course all the contenders for the throne took their turn at trying to draw the sword, but none could succeed. Arthur, quite by chance, withdrew the sword for another to use in a tournament. Following this he became King.

He gathered Knights around him and fought back against the Saxons who, since the Romans left Britain, were slowly but surely taking the country over. After many great battles and a huge victory at Mount Badon the Saxons' advance was halted.

Arthur's base was at a place called Camelot. Here he built a strong castle. His knights met at a Round Table. They carried out acts of chivalry such as rescuing damsels in distress and fought against strange beasts. They also searched for a lost treasure, which they believed would cure all ills - this was the 'Quest for the Holy Grail'.

Under the guidance of Merlin, Arthur had obtained a magical sword from The Lady Of The Lake. This sword was called 'Excalibur" and with this weapon he vanquished many foes.

Queen Guinevere, Arthur's beautiful wife brought romance to the story while his equally beautiful half sister Morgan le Fay added a dark side.

Unfortunately, as peace settled over the country things turned sour within the court of Camelot and civil war broke out. In the final battle at Camlan both Arthur and Mordred, Arthur's traitorous nephew, were mortally wounded. Arthur was set upon a boat and floated down river to the isle of Avalon. Here his wounds were treated by three mysterious maidens. His body was never found and many say that he rests under a hill with all his knights - ready to ride forth and save the country again.

Now, find out how this story developed.

When researching the reality of giants in the past, one story which has survived the ages is the apparent discovery of the ‘Glastonbury Giant’ which was allegedly unearthed in 1190, on orders of King Henry II , following rumors that the legendary King Arthur was in fact buried at that specific location. Here, between two ancient pyramid-shaped pillars at Glastonbury in Somerset, England, workers dug down to a depth of seven feet where they found a leaden cross with the inscription:

This discovery inspired the excavators to dig even further in the hope of finding solid proof of the legend’s existence and at sixteen feet deep they finally struck a large coffin hollowed out from the trunk of an old oak tree. Inside they discovered the skeletal remains of a man who had once measured close to nine feet tall, laid next to the skeleton of an average-sized woman, assumed at that time to be Arthur’s Queen, Guinevere. As covered in detail in The Myth Of Man by J.P. Robinson, skeletons measuring nine feet tall have been found all over the globe, with many examples having been discovered in the United States in particular.

It is said that their bones were reinterred in the church there about a century later, right before the altar and in the presence of King Edward I . It is from that time that Glastonbury’s long association with the Arthurian legends was cemented in history, despite the opposing arguments claiming that the inscribed leaden cross must have been placed there much later than the original grave, as it was buried nine feet above the actual coffin. 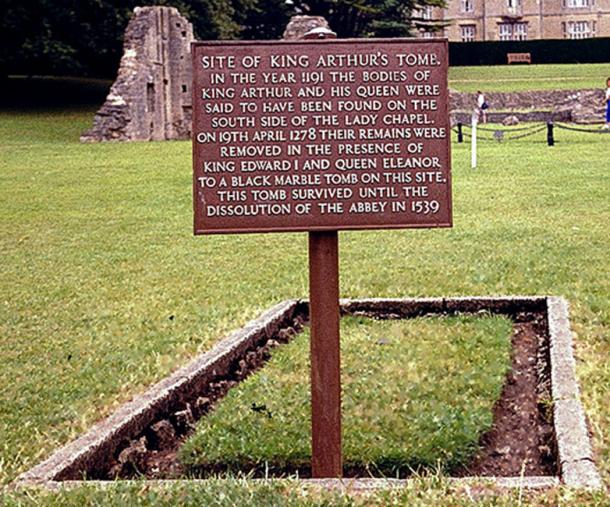 Site of what was supposed to be the grave of King Arthur and Queen Guinevere on the grounds of former Glastonbury Abbey, Somerset, UK. (Thor NL / CC BY-SA 3.0 )​​SML

Many believed that the cross must be a fraud, possibly left there by the monks at the nearby Benedictine Abbey, in an attempt to reap fame upon the abbey and the area by encouraging the nobility to offer donations supporting such a hallowed spot where the body of one of England’s greatest ever legends was laid to rest. 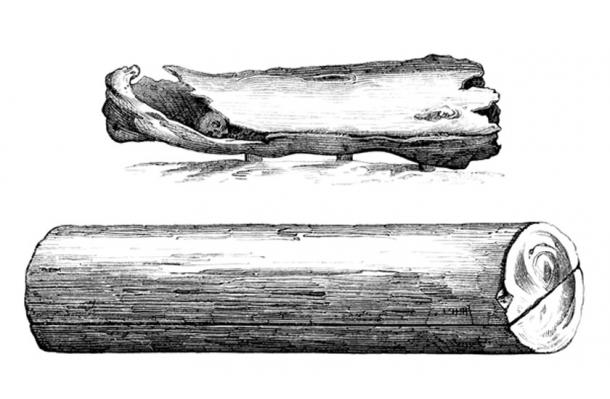 The Presence of a Giant Is Not Disputed

Despite the conspicuous discovery of Arthur’s alleged gravestone , the actual find of a giant figure is not really up for dispute, as the respected historian  Giraldus Cambrensis personally examined the massive bones in 1194 and he pronounced them genuine. Then hundreds of years later, in 1962-63, archaeologist Dr. Ralegh Radford studied the ancient giant remains following additional excavations of the site and ‘confirmed that a prominent personage had indeed been buried there at the period in question.’

So, whether or not the bones belonged to the legendary King Arthur or not, it appears that the skeletal remains of a nine-foot-tall male was unearthed at Glastonbury nearly 1,000 years ago, which brings giant mythology back to life. Who knows what other remarkable finds lay buried beneath the ground waiting to be discovered?

This article is an excerpt from 'The Forgotten Race' chapter in the non-fiction work on hidden history and real myths, The Myth Of Man by J.P. Robinson.

Glastonbury Abbey was a monastery in Glastonbury, Somerset, England. Its ruins, a grade I listed building and scheduled ancient monument, are open as a visitor attraction.

The abbey was founded in the 7th century and enlarged in the 10th. It was destroyed by a major fire in 1184, but subsequently rebuilt and by the 14th century was one of the richest and most powerful monasteries in England. The abbey controlled large tracts of the surrounding land and was instrumental in major drainage projects on the Somerset Levels. The abbey was suppressed during the Dissolution of the Monasteries under King Henry VIII of England. The last abbot, Richard Whiting (Whyting), was hanged, drawn and quartered as a traitor on Glastonbury Tor in 1539.

From at least the 12th century the Glastonbury area has been associated with the legend of King Arthur, a connection promoted by medieval monks who asserted that Glastonbury was Avalon. Christian legends have claimed that the abbey was founded by Joseph of Arimathea in the 1st century.

The Secrets of The Universe - Space Documentary