The Highest Energy (LIGHT) Ever Recorded Is Now Hitting the Earth

Now, researchers are reporting that the array has detected the highest-energy photon ever seen on Earth — and they think they know exactly where it came from.

Physicists have spotted the highest-energy light ever seen. It emanated from the roiling remains left behind when a star exploded in 1054 AD.

One measured photon has roughly the energy of a falling ping-pong ball.

The Tibetan Plateau is a vast elevated plain almost five kilometers above sea level, sometimes called the Roof of the World. It is bordered to the south by the world’s highest mountain range and to the north by desert lands.  It is one of the most isolated places on Earth.

But the extreme altitude makes it a useful place for scientists. In 1990, they built an observatory here to study the showers of subatomic particles that rain down from the upper atmosphere whenever it is hit by a high-energy cosmic ray. This work is better done at high altitude because there is less atmosphere to absorb the particles.

But the array also picks up air showers caused by a different source—high-energy photons. These mysterious photons are also created by astrophysical phenomena such as the interaction between high-energy particles and the cosmic microwave background. Consequently, they can provide a unique insight into these processes and the environments in which they occur.

Over the years, the Tibet Air Shower Array has spotted plenty of these photons with energies up to dozens of teraelectronvolts (TeV 1012). That’s roughly equivalent to the highest-energy photons that can be created on Earth. But nobody has ever observed more powerful photons. 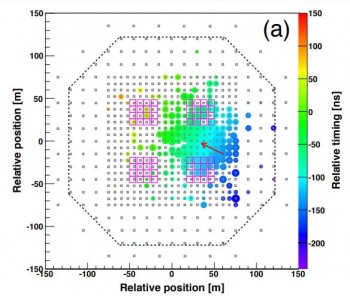 Until now. Today, researchers from the Tibet Air Shower Gamma Collaboration say they have observed photons with energies above 100 TeV for the first time, including a remarkable photon with an energy of almost 500 TeV. This single photon has about the same energy as a falling Ping-Pong ball and is the highest-energy photon ever recorded.

The collaboration has also worked out where these photons are coming from: the Crab Nebula, the remnants of a supernova that occurred in 1054 AD in the Perseus Arm of the Milky Way, some 6,500 light-years from Earth.

At the center of this nebula is a pulsar, a neutron star spinning at a rate of 30 times a second and emitting electromagnetic pulses over a wide range of frequencies. Although the Crab Nebula is not visible to the naked eye—it is about the same brightness as Saturn’s moon Titan—it is the brightest source in the night sky of x-rays and gamma rays with energies above 30 KeV.

That makes it of considerable interest to astronomers. One question that fascinates them is just how energetic these photons can become and what the distribution of photon energies tells them about conditions inside the nebula.

Photons of this energy are thought to be created by a process known as inverse Compton scattering. This occurs when a high-energy particle transfers its energy to a photon. In the case of the Crab Nebula, the high-energy particles are probably electrons and protons accelerated by shock waves in the powerful magnetic fields that surround the pulsar.  This gives them energies in the sub-petaelectronvolt (1015) range.

By comparison, the Large Hadron Collider, the world’s most powerful particle accelerator, has a collision energy of 14 TeV.

These particles then transfer their energy to photons left over from the Big Bang, called the cosmic microwave background, giving them hundreds of TeV. These are the photons being detected by the Tibet Air Shower Array. “This is the first detection of the highest energy photons beyond 100 TeV from an astrophysical source, and thus opens up the sub-PeV window in astronomy,” they say.

This reveals exactly what kinds of conditions must exist inside the nebula. In particular, it reveals the magnitude of the shock waves passing through magnetic field. And that in turn shines some light on the processes that must generate these shock waves.

Various theories predict a limit to the energy that photons can gain in this way. But the Tibet collaboration have found no sign of it so far.  It may be that photons with exaelectronvolts (1018) are being produced in this way. In that case, a single photon would have the energy of an air rifle bullet. In 1991, physicists measured a cosmic ray with an energy of 300 EeV, the so-called Oh-My-God particle, the highest-energy particle ever recorded.

But first, further evidence will be needed from the Tibet collaboration and other groups to help fine-tune astrophysical theories about exactly what goes on inside these most extreme environments in the universe.

Ref: https://arxiv.org/abs/1906.05521 : First Detection of Photons with Energy Beyond 100 TeV from an Astrophysical Source

by Emerging Technology from the arXiv (Source)

In 1054, Chinese astronomers took notice of a “guest star” that was, for nearly a month, visible in the daytime sky. The “guest star” they observed was actually a supernova explosion, which gave rise to the Crab Nebula, a six-light-year-wide remnant of the violent event.

With an apparent magnitude of 8.4 and located 6,500 light-years from Earth in the constellation Taurus, the Crab Nebula can be spotted with a small telescope and is best observed in January. The nebula was discovered by English astronomer John Bevis in 1731, and later observed by Charles Messier who mistook it for Halley’s Comet. Messier’s observation of the nebula inspired him to create a catalog of celestial objects that might be mistaken for comets.

This large mosaic of the Crab Nebula was assembled from 24 individual exposures captured by Hubble over three months. The colors in this image do not match exactly what we would see with our eyes but yield insight into the composition of this spectacular stellar corpse. The orange filaments are the tattered remains of the star and consist mostly of hydrogen. The blue in the filaments in the outer part of the nebula represents neutral oxygen. Green is singly ionized sulfur, and red indicates doubly ionized oxygen. These elements were expelled during the supernova explosion.

A rapidly spinning neutron star (the ultra-dense core of the exploded star) is embedded in the center of the Crab Nebula. Electrons whirling at nearly the speed of light around the star’s magnetic field lines produce the eerie blue light in the interior of the nebula. The neutron star, like a lighthouse, ejects twin beams of radiation that make it appear to pulse 30 times per second as it rotates.

For more information about Hubble’s observations of M1, see:

Researchers from the Tibet Air Shower Gamma Collaboration say they have observed photons with energies above 100 TeV for the first time, including a remarkable photon with an energy of almost 500 TeV. This single photon has about the same energy as a falling Ping-Pong ball and is the highest-energy photon ever recorded. The collaboration has also worked out where these photons are coming from: the Crab Nebula, the remnants of a supernova that occurred in 1054 AD in the Perseus Arm of the Milky Way, some 6,500 light-years from Earth.